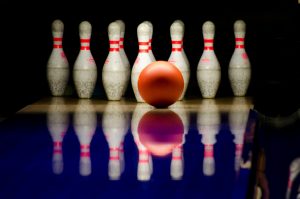 The sound is the first thing that hits you when you walk into a bowling alley. It doesn’t matter if you’re at Mid County Lanes in Middletown, DE, or an alley across the country, the sound of a bowling alley is one of a kind.

But what comes to mind when you hear the clash of bowling balls into pins? For us, we think back to the origins and the evolution of bowling.

Where Did Bowling Start?

A lot of people attribute the beginning of modern bowling going back to the Germans in the 4th century. Others say it was actually the English around the same time. However, anthropologists have found crude bowling balls and pins in the tombs of Egyptian children, meaning bowling could be as much as 5,000 years old. And yet, bowling is such a perfect game that after all this time, the general principles have changed very little! Pretty cool, huh?

The invention of the Bowling League

It wasn’t until the late 19th century that we started to see a standardized set of rules develop across the United States. But once the rules were set, the way was paved for the start of league bowling! Bowling clubs started popping up across the country and by the turn of the century, we started to see women’s leagues pop up, too.

Bowling has continued to grow decade after decade. In 1988, more than 20 countries competed against each other as bowling was presented on the world stage at the Olympics as a demonstration. Now looking forward to 2020, bowling may get another crack at becoming a summer Olympic sport.

No matter how competitive it gets, though, the essence of bowling is pure and simple fun. At Mid County Lanes, we always have a lane or two for you and your friends and family. Stop by and roll a few frames today and soak up the history and fun that comes with every game of bowling.

Join a League!
Special Group Rates
We use cookies to ensure that we give you the best experience on our website. If you continue to use this site we will assume that you are happy with it.Ok